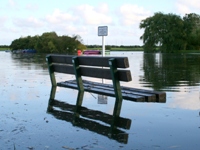 Carbon in the air
Over the last 150 years, carbon dioxide concentrations have risen rapidly from 280 to 379 parts per million (ppm) in 2005. Ice cores show that during the previous 650,000 years the concentration was between 180 and 300 ppm.

This increase in carbon dioxide in the air has been shown to be due to human activities.  Estimates of the amount of emissions since the industrial revolution match up with the amount needed to increase concentrations to current levels.

Climate Change
The Intergovernmental Panel on Climate Change (IPCC) are respected as independent and authoritative.  They state that warming of the climate system is unequivocal.  Global warming can be observed as increases in global air temperatures and ocean temperatures, widespread melting of snow and ice, and rising sea level.

Almost every month there are new weather records.  Here is one record that we think stands out:

11 of the last 12 years rank among the 12 warmest years since instrumental records began in 1850.

In our opinion anyone that now says climate change is not happening is, for whatever reason, simply lying.  No longer can anyone actually be in any doubt.

Is climate change caused by the increase in carbon dioxide in the air?

This is what we say:
Most scientists, most logical arguments and the basic chemistry models suggest that carbon dioxide is causing climate change.

Is it too late to do anything?

This is what the IPPC say:
Continued greenhouse gas emissions at or above current rates would cause further warming and induce many changes in the global climate system during the 21st century that would very likely be larger than those observed during the 20th century.

This is what we say:
Most scientific opinion that we have read agrees that even if carbon emissions were miraculously ended today, some climate change will continue to happen.  If emissions continue at present rates then climate change will be increasingly worse.  On an individual business level, reducing emissions will mean fractionally less climate change.  If reducing your impacts encourages others to do the same then the affect is multiplied many times, which can only be a good thing.

Will climate change affect the UK?

This is of course the wrong question to ask, although it is mentioned many times by those that wish to continue polluting the atmosphere unabated.  The possibility that millions, potentially billions, of people worldwide will be displaced by flooding is a humanitarian problem we can’t ignore, regardless of affects in the UK.

However to address the UK question.  Climate change is already causing unprecedented flooding in the UK through torrential rainfall.  Climate change could lead to the sea level rising enough to flood East Anglia and London.  Birds, mammals, insects and plants that exist in the north of the UK or in mountain habitats could become locally extinct, as they will have no-where to go.  Fish are growing massively bigger than ever before, and possibly dying much younger as a result.  Dragonflies and butterflies are arriving from Europe to enjoy our new Mediterranean climate, only to die off because the plants they rely on have not arrived yet and will not do so for many decades.  Aid and defence budgets may lead to increases in UK taxes if projections are correct about the impacts in other parts of the world.

Human activities have caused there to be more carbon in the air than at any time in the last 650,000 years.  Climate change is happening.

These two facts are very likely to be linked.  If so, climate change can be slowed by taking positive action.  Regardless of scientific proof, it makes sense to make a difference now.